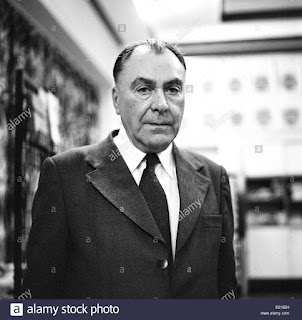 Ernst Käsemann
In 1937, Hitler called on the clergy and churches to support his vision for Germany and to give him full allegiance. NT scholar Ernst Kasemann defied Hitler. Instead, he preached on Isaiah 26.13, “O Lord our God, other lords besides thee have ruled over us, but thy name alone we acknowledge.” Kasemann labeled Hitler’s demand idolatry and called for German Christians to resist.

The Gestapo arrested and imprisoned Kasemann for being a subversive.

During his confinement, he wrote a biblical critique of Nazism that was published under the title, “Hebrews: The Wandering People of God” in which he identified the church as a pilgrim community with no earthly fatherland. Rather than seeking peace with society, he contended that the church must be a community in conflict with society.

A wise word for all time.
Posted by Already/Not Yet at 3:32 AM

Already/Not Yet
My passion is the Kingdom of God. I hold a PhD from the University of Wales, Trinity Saint David. I wrote my thesis "The Lord's Supper as an Anti-Imperial Praxis" under Drs. William S. Campbell and Kathy Ehrensperger. I serve as the Senior Research Professor of Biblical Theology at Criswell College (Dallas, TX). For ten years I served as the Editor of the Criswell Theological Review (CTR). I also taught for 18 years the Presidents' Class at First Baptist Church, Dallas, Texas, a Sunday morning Bible study I taught verse-by-verse through the Scriptures.